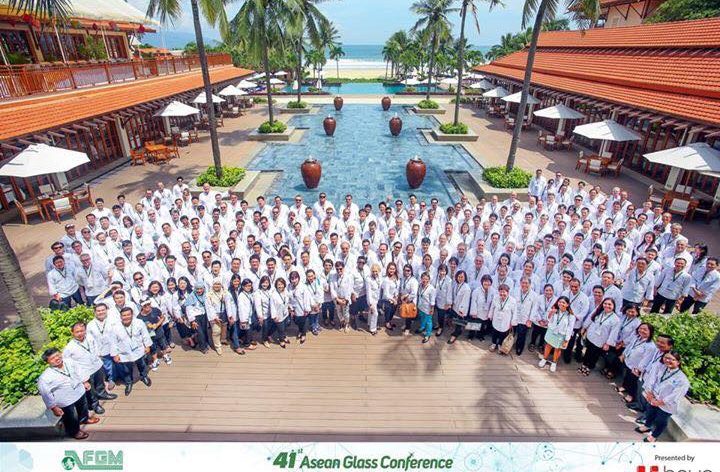 OMS Italy and OMS Singapore were one of the official sponsors at the 41° Asean Glass Conference held from the 9th to the 12th of October 2017 at Da Nang (Vietnam).

This occasion represented a moment in which different cultures met and it has been a great opportunity to share new ideas, toughts and solutions concerning the glass sector in particular. “Glass Digital Era”was indeed the subject of the event.

As reported in an article pubblished on the Glass World Wide magazine: “South East Asia has emerged as a major powerhouse for glass tableware production in recent decades. The development of a sizeable, local middle class and rising purchasing power have been pivotal, in addition to which, the region has become an important exporter to Europe, the Americas and the rest of Asia.”

OMS was glad to take part at this conference, first of all because of the opportunity to become aware of the new challenges in the glass sector and also to improve its technological skills concerning the glass market in the digital era.

A “wired” collaboration for success

End-of-line packaging is an essential operation for the safe handling and transport of products. Efficiency, flexibility and precision are the requirements that modern secondary packaging systems must meet in order to ensure maximum productivity levels, even in the last operational phases of the supply chain.

OMS Group, a world player in the production of systems for the packaging of palletized products, is perfectly aware of this, which for over 20 years has relied on LAPP, a leader in the development and production of integrated solutions in connection and wiring technology, for the wiring of the various types of machines that make up its offer.

“The quality and reliability of LAPP products are certainly the pillars on which our consolidated relationship is based” comments Maurizio Alessi, OMS Marketing Manager who continues “Furthermore, knowing and using LAPP cables for so long has allowed us to implement scale economies in order to optimize the design of our machinery, in terms of electrical components, according to their specific characteristics “and concludes” From this point of view, the easy availability on a global scale represents for us, as International group, one of the main advantages together with the wide UL and CSA certified range for the North American market “.

“OMS & LAPP” are two international companies which share the idea that developing custom solutions is a real added value for their customers, state Gaetano Grasso, Head of Product Management and Marketing of LAPP, who adds” This is the premise of our a relationship that also includes supporting OMS in the design and construction of highly performing end-of-line packaging machines “and concludes” For this reason, in the selection of the ideal supplier for the packaging of the cable reels of the new logistics center of Hanover, LAPP Germany has relied on the validity of the personalized proposals of OMS ”.

A partnership based on excellence and mutual collaboration, also evidenced by the choice by LAPP to adopt OMS solutions for its new logistics center in Hannover.

“Thanks to its expertise, OMS-IPS (German branch of OMS Group) was able to configure and install our” dream machine “which combines, in a single workstation, both strapping (08RP model) and operations for hood, with shrink film (AT53 model), thus allowing us to reduce the use of film, where permitted “says Andreas Gesse, Head of Logistics Center 3 in Hannover, of LAPP Germany who continues” A solution that allows you to package products with a diameter of up to 120 cm, with a speed of 80 packs per hour, double compared to the machines used previously “and concludes” Finally, given the particularly delicate historical period, it acquires even more value that they have strictly respected delivery times, in addition to the timeliness of local technical assistance service “.

OMS GROUP a matter of packaging.

YOUR BEST SOLUTION FOR THE BIG SIZES

In the last few years the tiles sector has reached new horizons, redefining new qualitative and dimensional limits. In a short time, the standard sizes have been overtaken by the big sizes, obliging consequently, the manufacturers to renew or enlarge their products range in order to satisfy the growth in demand. Marpak (OMS Group) a leading company in the end of line and packaging solutions, in synergy with the OMS’ R&D department, makes a leap forward, ahead of time, developing new self-sizing packaging lines to process new dimensions.The first line has been created for CERAMICA FONDOVALLE (Modena, Italy), a leading company in high quality porcelain-stoneware tiles and slabs production and distribution. The challenge was hard. Produce a single plant able to run different sizes. 3600mm X 1750mm for the crate palletized products and 3200mm X 800mm for the rack-palletized slabs with height up to 2mts and a weight up to 3, 5 tons. Totally provided by Marpak, the line is composed by different in-line machines able to run, automatically, a random production. The first part of the line includes dedicated loading areas, followed by horizontal 06 and vertical 08 strapping machines, tasked of ensuring at the rack, the fragile and precious slabs, while an automatic corner applicator device, protects the edges. The second part of the line is dedicated to protect the products from external factors. Composed by loading areas for all the other products, it includes self-sizing machines AT05+AT04 able to cover, with a protection film, 5 sides of the packages. A special thermo-shrinking machine FT54 warm the film, creating a solid and strong block. This cutting-edge packaging line is able to reach a productivity of 20 packs per hour. The result in terms of protection and aesthetics makes the MARPAK line, your best choice for the big sizes. OMS GROUP, a matter of packaging.
Leggi tutto
March 29, 2020

To all our valuable Customers and Supplier

OMS Spa is pleased to inform all our Customers, Partners and Suppliers that our Company has been included in the List of Strategic Companies revised by the Italian Government on March 25th 2020.

Starting from Monday March 30th, our Paruzzaro Plant will be back to work, operating to the best of our abilities – given the current conditions – in full respect of the indication of our Ministry of Health.

– Offices personnel will still be operating from home in Smart Working mode;

– All customers waiting for our service engineers will be contacted in order to get an official confirmation that our technicians can travel to destination and access the sites.

We are asking your understanding in advance shall we will not be able to accomplish or delay some of our commitments due to Force Majeure.

Certain in your understanding and thanking you in advance for your kind collaboration.